After being in their company for over a week…
I HATE tomatoes!

Their long vines tripping me and in some cases I couldn’t find the fruit…so I spent 4 days trimming them.
Then SO many started ripening so I had to pick pick pick like a mad woman. I had more tomatoes than I could find trays and places to store them! (And let’s not mention what damage the robins were doing!)

I had tomatoes everywhere! In trays along one kitchen wall…along the window sill…all around the kitchen sink and lastly on my large green cart/wagon…full to its very edges, on our deck! Let’s also not mention, my hubby’s shed…the counter there was over run with them! Fans were running everywhere to stop/slow down deterioration. 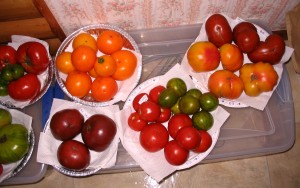 Along the kitchen wall. Part 1 of 2 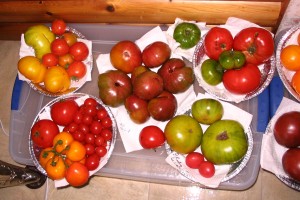 Along the kitchen wall. Part 2 of 2

My back ached, my feet hurt, my hips burned…lifting and bending. Trying to keep all the varieties marked and properly named.
Then I started harvesting the seed. As I harvested, I took photos, tasted, wrote notes and took more photos.

As I worked, I was wondering if drinking some wine would help? First it would numb the pain I was having standing all the while AND second it could cleanse the palate between tastings. One tomato flavor was starting to run into another…
I quickly changed my mind…seeing as I don’t drink (much…ok so I have the total of a whole German beer, after 17 tastes stolen from my hubby…in a year…) AND I would need w-a-y more wine for this job!

What would my notes look like and would I eventually be able to find where I put the rest of the tomatoes or their names? And worst than that…would I be able to explain the photos on the web?
Finally I ran out of cups…
Thank goodness!

Unfortunately…I am just 3/4th of the way through!
Yup…over 100 varieties…and still (maybe) 20 or so to go. That’s the row along my kitchen wall….AND a few more I need to check out…still in the garden. Have to check my record book (my inventory bible) !
I need TIME OFF!

For your eye-candy pleasure, I will be posting MORE (delicious) photos shortly…
Cheers,
M