I always knew I had TOO MANY FRUIT trees! 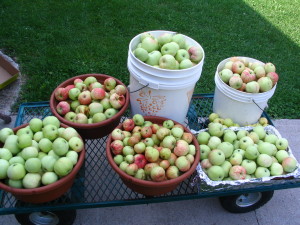 A wagon full of Battleford in various stages of ripen-ness!

So it should not come as a surprise that I can offer some photos here of my collection. Seeing as young homeowners are always in need of some advise in choosing the best tree for their yard, I thought I might offer some of my experiences as well.

Some of the earlier offered varieties were grafted onto root systems that required (some of them) over 10 years to come into maturity! Even regular apples and crab apples, without grafting were coming into fruit production well before this. SO I always wondered WHO’s BRIGHT idea was it to select these crazy root grafts???!! Thank goodness SOMEONE smartened up and the fruit trees offered today come in far sooner.

1) My collection started with one called Kerr. It is classed as an “apple crab”. Dev. & intro. by Morden Nurseries in 1952. Fruits are mahogany red, elongated slightly (med. thick) skinned with crisp juicy white flesh. Trees can get taller with great 90 degree branch angles offering great support for heavy loads. This one came in late, fruits (able to withstand -5C) and was my favorite storage apple, lasting well into March! Heavy production. Not once did it become mealy. Very juicy to its end. I think it succumbed to “tree borer” after many years of service! The first one I purchased…I believe the man did his own root grafting and it took (my) tree close to 9 years to offer its fruit AND only after I did a native dance around it with an ax AND pruned down 1/3 of its branches! Hopefully the ones offer today are much earlier.

2) The second one I added was Norland. I chose it for its larger size and that it was mainly for earliest harvest and fresh eating. Skin has a beige base, overlaid with tons of scarlet red striping from stem to flower end and tapering (like a Delicious apple) toward there as well… Fruits however will perish quickly, so if you can give some away and eat the rest…then it is fine. Will not store well either, but production is heavy! Flavor is sweet and filling. Will get mealy with age. Trees grow upright and take little space. Branches also offer the less than favored 45 degree angles, so needs watching.

3) Third was the very popular (at the time and for many years later…) Goodland. Dev. & intro. by Morden Nurseries. Had heard this was the all time favorite for making pies and we were a “pie” family, with Mom being (in my humble opinion) one of the best pie makers around. Another not too tall tree (alto. told…16′ x 16′!) with loads of chubby oval, large, roundish fruits bearing ice green base, overlaid with a gentle rose blush. Flesh was very crisp white. Great for pies, sauces and fresh eating. Hardy to Z. 3. A pollinator is required and one can expect harvests in late August to early Sept. Mine did not last long, because the spot I placed it in held too much moisture in periods of heavy rain or lots of snow. AND we KNOW (now) all fruits, esp. apples hate wet feet!

4) Forth was one called Chestnut. I don’t know if many places have this one anymore. Growth is also upright (quite tall!) not requiring much space. Branching is not favored, having that <45 degree angle, so some branch tying maybe necessary. Fruits are classed as a large crab, somewhat squat in shape, thicker skin, bearing a scabby exterior…which is normal for these. These were super sweet, juicy, having a nutty flavor and store real well.

5) Fifth was one called Heyer #12. This was my first favorite and is still today. It offered fruits in its 3rd year…16!…as my Oma counted them proudly, on a very small frame! It is super hardy, long lived and the majority of “combination” grated apple trees today have the Heyer #12 as the “mother” tree on which they graft others onto. It is a small tree, so easy to get the fruits without a super tall ladder. Branches offer the famous and favored 90 degree angle, so can bear a ton of weight as well, without splitting. Fruits are med. sized, roundish, light green skinned, crisp white flesh with some tart when first tasted. Skin is thin and therefore will not last long, unless harvested early and popped in the fridge. Not a storage apple. Excellent for pies! Unique taste…tart and sweet.

6) Sixth one was one called Minnesota #447. Another favorite with very low structure and super easy to harvest. Problem tho was its branches which did not always offer the hopeful 90 degree angle which is better able to take heavy fruit loads. This one offered more of the 45 degree angles, not always favored, as these could easily snap apart under a load. Some work was necessary to support branches once the apples started arriving. However a better fresh, crisp, sweet tasting, nutty eating larger apple my hubby and I have not found! It also arrived late and is an excellent storage variety. However this tree (eventually) got fire bright and eventually succumbed to it many years later. I do now have a replacement, planted farther away…which offered its first serious harvest this past summer . BOY! Was my hubby happy, as it is his favorite. I do have a theory about trees being susceptible to fire blight and wouldn’t mind sharing if anyone asks.

7) Seventh was one called Battleford. This one I waited over 15 years for its first fruits! Another obtained from that same first nurseryman! (I hope offerings of today are much sooner!) I had planted it in 1989 and saw a few in 2004! Each year it has slowly increased to where now I get a real nice load…but never too heavy…which is nice. The tree itself has branches that are less than the 45 degree angles (see photo) seen in problem limbed trees. Yet for some reason due to its strength and lack of heavy fruit loads, I have never had problems with it. A true large sized apple with thicker skin and softer white flesh. Base is light white green with pink rose stripes. It will last a while longer in the fridge, but beware, it is not a storage type. Good for pies, sauces and good, but not great for eating. Super hardy in Z.2 or less. No disease problems ever.

8) Eighth came to me from a lady “Jane/Jean” in the Stead, MB area, many many years ago. She brought me several seedlings and told me to choose the one with the largest and darkest leaves. She obtained her seed from a huge tree in Winnipeg (which I have yet to find…) true to its own roots! She also showed me slices from that tree’s fruit, which astonished me as they were almost fully red/rose flushed and veined inside. I was impressed! I call it the Japanese Red. Over time I saw one that seemed to represent what she was after and I also kept 2 more (one that turned out to be a smaller crab..with all the same flesh coloration and the other (a larger) that shows a real pleasant cross !) This poor tree has been picked on by terrible sap suckers and bears their scars from bottom to where the branches widen. (My bad!) Occasionally a mild fire blight is seen and it manages to pull through nicely. This year I have seen some more and yet it rallied! When fruits are removed I must do more sterile surgery.. Fruits are classed as apple in size, squat to roundish, with moderately heavy production. Skin is thicker, deep mahogany purple/red with tiny spots. Flesh is mostly rose red and some white…quite tart! Not everyone can eat this one. BUT it makes the very best Apple Butter in the world! Blossoms are deep rose red colored. Some years ago I sent scions and fruit samples to a then Dr. Campbell at Morden Nurseries. He became quite excited and said it appears to be the type Japanese immigrants brought over in the 1940!

9) My ninth…is of course the Japanese Red x ? cross which is not quite as happy as the original as I almost lost it this spring ’15. However it has made hundreds of suckers (clones) which I MUST propagate to save this particular tree as I love it. It bears the outside color of the original, with thicker skin and almost white flesh. It is very delicious being sweet and a little tart at the same time. Love its flavor! Fruits appear slightly elongated with unusual thick stem ends! A chef from the Delta Hotel stopped by my Van on the highway when I was offering it for sale one summer. He tasted it and insisted I deliver 180 apple fruits (all must be perfect) for an event he was having at his hotel. I was excited! Blossoms are light rose colored.

10) My tenth is certainly the wee elongated crab apple red fleshed, Japanese Red x ? cross 2 mahogany skinned cross from the original. It has NO disease issues and bears bonkers in the late summer. Very few suckers. Birds certainly love the fruit, once frost sets in and they soften. Quite tart and not easy to eat, alto I am used to it! Blooms are deep red rose.

11) I have finally obtained a “Combination” apple where Heyer #12 is the “mother tree” and 5 others (Hardi-Mac, Haralson, Parkland, Honeycrisp and Haralcourt) are grafted on. I have attempted to espalier it to have less stress on the branches, after a method I saw others use. Not only will it reduce my need to use a ladder, but I can control its load and growth over time, as shown in a video from “Back to Eden“. Am quite excited to have this one in my collection, as it offers others that have not been successful here.

12) OMG! I almost forgot! In between the forth and the fifth I obtained one called Kirk Apple from Boughen’s Nursery. It is also a tree with smaller stature (?grafted onto Dwarf root stock) but still with troubling branches of 90 to 45 degrees. This tree is borderline hardy against Fire Blight and susceptible to bright winter sun. So trunks must always be painted prior to winter to prevent damage. Fruits are the earliest BEFORE Norland, quite large with crisp sweet white flesh. Skin base is lime green (thin, so will not store too long) with some pink blush. Excellent pie apple and also for eating!

In the years gone by (over 31 years on this farm) I have grown other apple trees: Haralson, Collet, Haralred, Rescue, Trailman, Luke and Boughen’s Delight. The latter lasted the longest of this group and strange as it might seem Collet, which is rated to be hardy to Zone 2, did not make it by me. Sad to say. Maybe I need  to try it again!?  Really???

And that’s not all!

I am sure more info. will arrive to my mind, as I keep thinking, but for now this is what I have to share (…all from memory). Some photos to follow in the next blog.